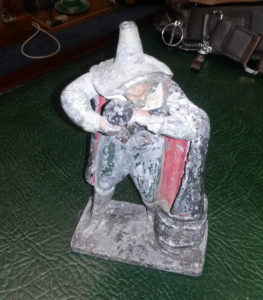 The houses or pariliament were bombed during world war two at which point a lot of the lead on the roof melted and was subsequently reclaimed.

Its entirely appropriate that this was then made into this figurine or Guy Fawkes who tried the same thing a few hundred years earlier and was also unsuccessful!. This item can be viewed at Bratinree Antiques Centre and is priced at £165.