Skip to content Skip to main menu
Home › Uncategorized › Clapham & Norman Info contributed by James
A customer, James, came into the centre after reading the Clapham and Normal pocket watch article that asked for further info on the maker.  I repair clocks at the centre (www.braintreeclockrepairs.co.uk) and so the subject of local clock makers is something I always like to hear about. Apologies to you, the reader, for the formatting of the email below – some of the font sizes went all over the place and I cant change them back!. Im better with clocks than computers. In fact I despise computers and believe an entirely clockwork world is the way forward.
Thanks again James
Justin
Chief Clockist
Braintree Antiques Centre.
[Pictures at the end of the email]
Hello,
As promised, here is the little I know about these people. I see http://www.clockswatches.com lists them, just saying “Clapham & Norman of Coggeshall. This clockmaker or watchmaker has 8 trade directory entries listed on this site”, but I wasn’t keen enough to stump up their fees for reading them. So…

I am related to Harry Clapham’s second wife and knew her and Harry Norman when I was a child, so while I can shed very little light on their business I do know a little about Messrs. Clapham and Norman themselves.
As can be seen from the envelope, they traded as Clapham & Norman, Watchmakers & Jewellers, Market Hill, Coggeshall. What I cannot fathom though is their claim to having been ‘Established 1894’. I can find no other connection with this trade in either family so perhaps the most likely explanation is that they took over an existing business that had indeed been going since the 19th century. Eli [aka John] Fricker was a Coggeshall jeweller and watchmaker who died in 1883 but his property, both business and personal, was sold at auction in that year. There are records of a Mr H Barton in 1886 and a Frank Dunningham in 1891, both Watchmakers of Coggeshall, though no census return I can find includes any other jeweller or watchmaker in the town and the only such burials there were the Claphams. clockswatches lists a number of other watchmakers in Coggeshall but there is no indication as to their dates [without paying] so they could well be much later or earlier. Alternatively, as Harry Ernest Clapham was born in 1881 I suppose he could have bought and sold his first piece of jewellery as early as ’94, though it surely couldn’t have been regarded as an established business. I can find no record in the pages of the London Gazette of the partnership being formed or dissolved.
Harry’s father and his before him were boot makers in Coggeshall but in 1901 Harry was a Jeweller’s Assistant and in 1911 a Watchmaker’s Assistant. He was still in Coggeshall but I cannot say who he was assisting. Harry married Alice Blackwell (1881-1942) in 1903 and they had four children and it looks as though the youngest son might have worked with him and possibly taken on the business after his father died in 1959 as his burial record describes him as a Watchmaker as does his father’s, though Harold Stanley Clapham only outlived his father by four years. Alice’s forebears were gardeners, so the business didn’t come from them either. After Alice died Harry married my great aunt Winifred Emberson, nee Eady, (1889-1971) and they lived at Ivy House, Church Street, Coggeshall. The Eadys had no connection with watchmaking either, Win’s father was a coachman, as was Harry Norman’s father according to the 1901 census.
Harry Robert Norman was born in Bradwell in 1895, the year after his business was supposedly established! In 1911 Harry was an Apprentice to Watchmaker but again there is no indication as to who he was working for; he was still with his parents in Bradwell. His father Henry (1837-1922) was recorded as being an Estate Carpenter. Maybe Harry N was apprenticed to the same watchmaker that Harry C was assisting, and perhaps the most likely candidate is W J Underwood in Kelvedon, who was a 42 year old watchmaker in 1911, though he was in South Mimms in 1901 so presumably couldn’t have been Harry Clapham’s employer then [though the Underwoods could have just been away from Kelvedon temporarily at the time of the census] but it seems unlikely that the business could have moved to Coggeshall, changed its name and owners and still be considered the same enterprise to match that Established 1894 claim.
After Harry Clapham’s death – and before, along with Harry C, for all I know – Harry Norman lived with the second Mrs Clapham at Ivy House until her death. From what I know of the people, the times and their ages I am sure this was an entirely ‘proper’ arrangement. You couldn’t imagine anyone more proper than my Aunt Win! I remember the house was chock-full of clocks and midday was quite an experience! Harry Norman then returned to Bradwell and lived out the rest of his days at Tippetts Wade on the corner of Church Road and The Street, still interested in clocks judging by the photo, which looks as though it were taken for a newspaper article, and closely connected with the Church there, possibly as churchwarden. He died in 1981.

Does that make sense? I don’t suppose that is really what you were hoping for but it might suggest a line of enquiry or jog someone’s memory. I hope it is of some interest to somebody.

Coggeshall Museum is probably the best place to start looking for more information.

All the best,
James.
PS. Please no not publish my email address. Cheers.
[IF YOU WOULD LIKE TO CONTACT JAMES TO SHARE INFORMATION PLEASE CONTACT ME AND I WILL PASS YOUR DETAILS ON admin@braintreeclockrepairs.co.uk]
PICTURE 1: Harry Robert Norman. 1895-Nov 21,   1981 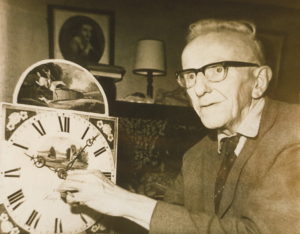